Amazon has set its eye on the next business it wants to disrupt in its key overseas market India: online movie tickets. The e-commerce giant said Saturday it has partnered with local online movie ticketing giant BookMyShow to introduce booking option on Amazon India shopping site and app.

The move comes months after the e-commerce giant began offering flight ticketing option in the country as it races to turn its payments service Amazon Pay into a “super app” — a strategy increasingly employed by players in emerging markets such as India.

Starting today, Amazon users in India can book movie tickets from the “movie tickets” category under “shop by category” on the shopping site or through the Amazon Pay tab, the e-commerce firm said. BookMyShow, which leads the online movie ticketing market, is the exclusive partner for this new offering, the two said.

To gain some market share, Amazon said its credit card users in India will get a 2% cashback on each movie ticket purchase. Until November 14, it will also offer a cashback of up to Rs 200 on each ticket purchase.

Neither of the parties disclosed who will foot this cashback. However, BookMyShow is likely paying Amazon a fee for tapping “millions” of customers the e-commerce giant has amassed in the country.

For its flight ticketing service, Amazon India partnered with Cleartrip . Balu Ramachandran, SVP at Cleartrip, told TechCrunch in an interview earlier that the company was paying a promotional fee to Amazon, but declined to offer specifics.

An Amazon India spokesperson declined to comment on the financial arrangements. 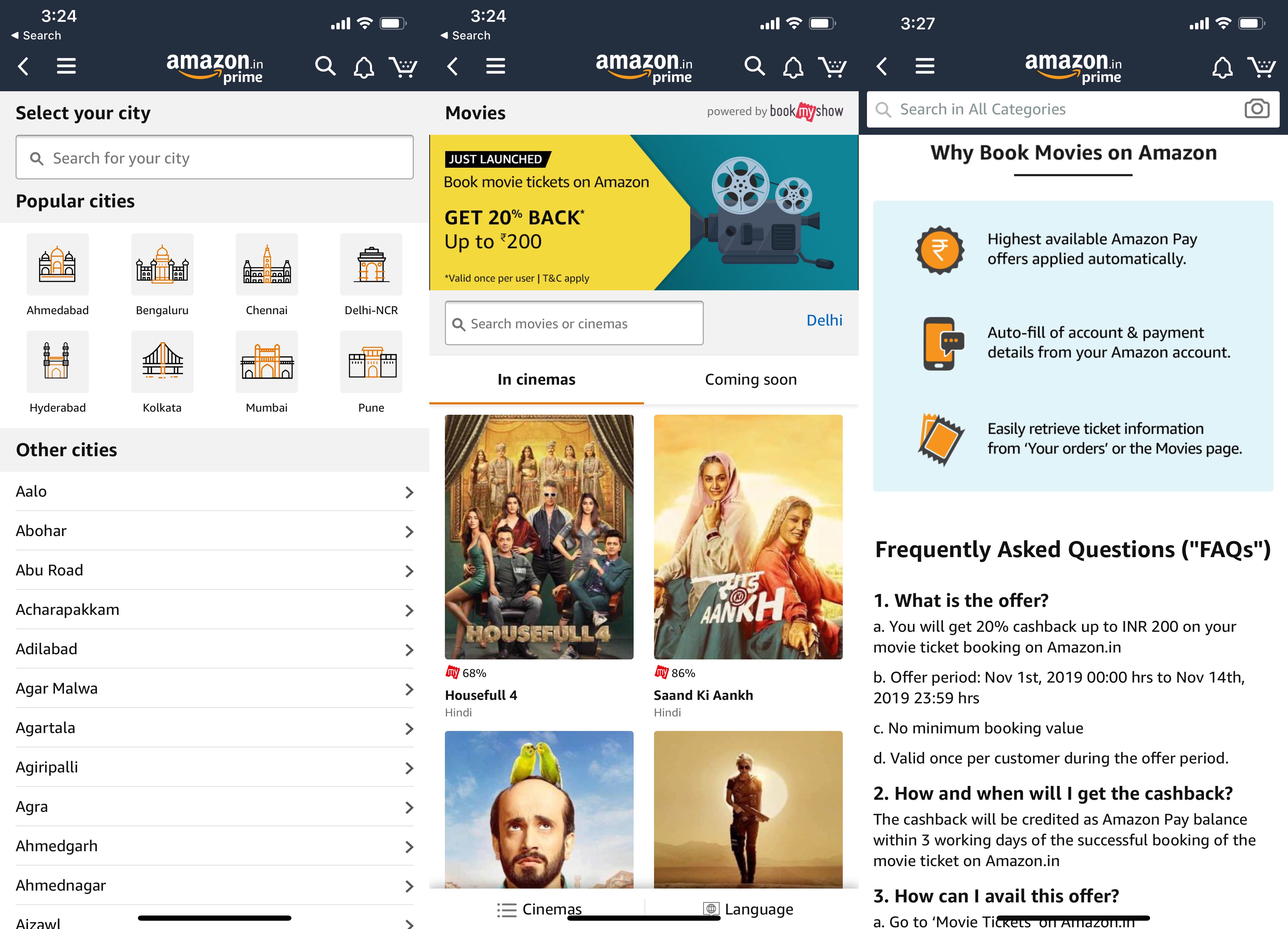 BookMyShow, which employs 1,400 employees, sells about 15 million tickets each month. The service, which has a presence in over 650 towns and cities, today counts heavily-backed Paytm as one of its biggest rivals. Paytm, which entered the movie ticketing business three years ago, has been able to eat some of BookMyShow’s market share by offering cashback on each ticket purchase.

The media and entertainment business in India is worth $23.9 billion, a report from EY-FICCI said in March this year, which noted that consumer spendings on the web is increasingly growing. More than 50% of all tickets sold by the top four multiplex chains in the country in recent years have occurred on the web.

Ashish Hemrajani, founder and CEO of BookMyShow, said through the partnership the company will be able to access Amazon India’s “deep penetration across tier 2 and tier 3 cities.”

Mahendra Nerurkar, Director of Amazon Pay, said today’s partnership shows Amazon’s commitment to “simplify the lives of our customers in every possible way — as they shop, pay bills, or seek other services.”

Last month, Amazon introduced a new feature that allows Amazon Pay users to pay their mobile, internet, and utility bills. This is the first time Amazon is offering these functionalities in any market — it plans to bring this to the U.S. in coming months.

Amazon has been quietly expanding its payments offering, built on top of local banks-backed UPI payments infrastructure, in the country. Unlike its global rivals Google and Walmart that offer standalone apps for their payment services and also focus on transactions among customers, Amazon has kept Pay integrated with its e-commerce offering and focuses on consumer-to-business transactions.

The company maintains tie-ups with several popular Indian online services and frequently offers cashback to incentivize users to pick Amazon Pay over other solutions. Earlier this week, Amazon pumped about $634 million into its India business.