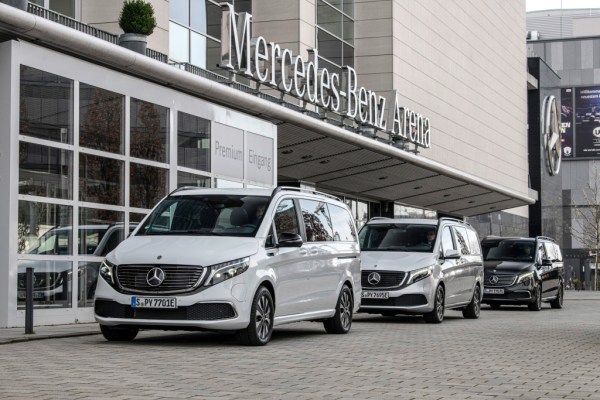 Mercedes-Benz is now selling its EQV 300 all-electric premium van in Europe, the second EV to come out of the automaker’s initiative to produce a line of battery-powered models under its new EQ brand.

A concept version of the EQV was first shown in March 2019. But unlike so many concepts destined for nonexistence, this one was marked for series production. The EQV, which can seat up to eight people, is designed to appeal to customers seeking a more luxurious ride. The base price of €71,388 (about $78,359) provides a hint at who Mercedes is targeting.

Mercedes is marketing this toward families, upscaled adventurers and corporate clients who might be looking for a shuttle vehicle. The vehicle’s seating can be configured in numerous ways to meet various customers’ needs. It also can be customized for packages, not people.

The EQV comes with a compact electric drivetrain on the front axle that produces 150 kW, or 201 horsepower, as well as a 100 kWh battery pack, and can travel an estimated 418 km (260 miles) under Europe’s WLTP standards. The company is also showcasing its MBUX infotainment system in the EV, which has a number of tech-forward features, such as a self-learning voice control system with connectivity features.

Mercedes is selling the EQV 300 and a longer wheelbase version called AVANTGARDE. Both will be produced at the company’s plant in Vitoria in northern Spain, alongside the V-Class and the Mercedes-Benz Vito.

The van comes with a four-year maintenance plan that covers the battery up to 160,000 km, or eight years. Buyers also get the company’s navigation services for free for 36 months, as well as a membership to EV charger Ionity each for one year. Owners will also have one-year free access to Mercedes me Charge. The feature shows the charging infrastructure network in Europe and lets users start, stop and pay for charging via the Mercedes me app, a credit card or through the media display in the vehicle.

Mercedes announced its “EQ” technology brand in 2016. Since then the company has unveiled several EQ- related concepts as well as its first series-production vehicle, the EQC electric drive SUV. The company has previously said it plans to invest more than $12 billion to produce a line of battery-powered models under its new EQ brand and spend another $1.2 billion in global battery production.