Times Internet said on Thursday it reaches more than 557 million active users in India each month and over 111 million users a day as several of its digital offerings demonstrated strong growth in the past year.

The Indian conglomerate — which operates over three-dozen properties, including on-demand streaming services MX Player and Gaana, and newspapers Times of India and Economic Times — added 107 million monthly active users in the financial year that ended in March, it said.

Its platform clocked over 67 billion page views in FY 2020, up from 47 billion from the year prior.

These figures put Times Internet, a subsidiary of 182-year-old Bennett Coleman and Company Limited (BCCL), at the centre of the world’s largest open battleground (well, almost), which is otherwise dominated by Google, Facebook and Amazon.

According to analytics firm Comscore, Google reached 98% of the digital population in India on web (desktop as well as mobile) in the month of June. During the same month, Facebook reached 94.9% of the population, Times Internet 77.7% and Amazon settled at fourth place with 76%. (The figures do not include app usage data.)

Founded over 20 years ago, Times Internet had a huge headstart over nearly every firm that dominates the digital landscape today. But it largely failed to cash in on that for several years, critics say. Under the current leadership, however, the firm has followed a steady path and grown. 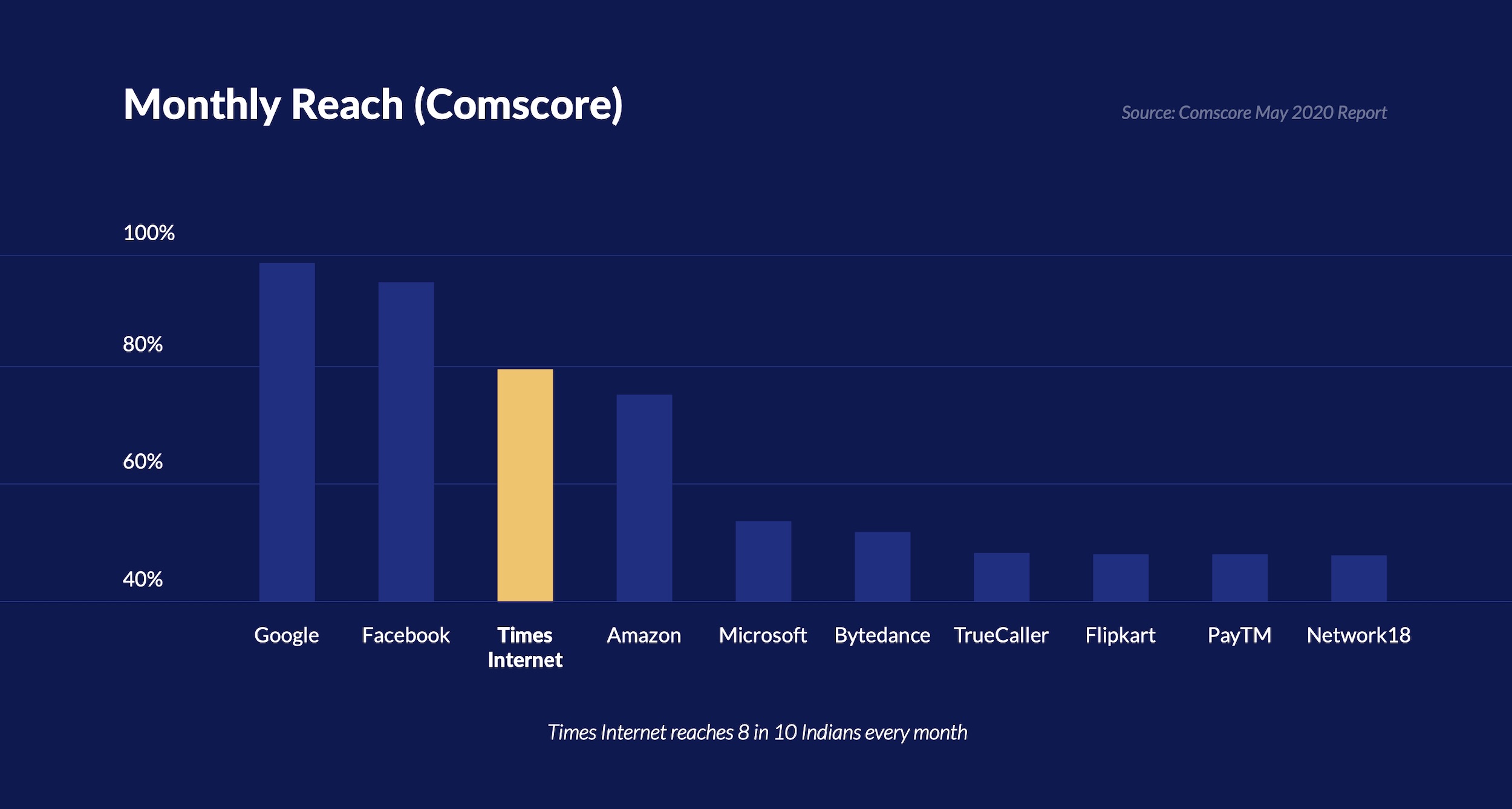 Comscore data for the month of May (Image credit: Times Internet)

Gajwani acknowledged that some of Times Internet’s offerings weren’t in great shape at the beginning of the last decade. “So we put a lot more emphasis on just product quality during 2013 to 2016. The next few years after that we also bought and built good products.”

“We’ve sold products or exited products where we didn’t think we could be competitive. We’ve got a reasonably strong portfolio now,” he added.

The most recent phase of Times Internet’s growth, said Gajwani, is the push to find revenue channels beyond ads. Gaana, MX Player, ET Prime (ad-free tier for Economic Times) and Times Prime (which bundles and resells a range of third-party subscription offerings) are helping it find subscribers, while MensXP’s e-commerce section, ETMoney, MagicBricks, GradeUp and Dineout are driving transactions.

Overall, Times Internet said its revenue grew 24% to $221.5 million in FY20. The firm did not disclose how much revenue it clocked from subscriptions, but said it had over 2 million paying subscribers and its transacting businesses grew 68%. Its ad business was also up 22%.

But its heavy reliance on ads means it has also been hit by the coronavirus, which slashed consumers’ spendings across the industry, resulting in advertisers cutting their budget.

Gajwani said the month of March saw a “big drop” in ad revenue for the firm, but the next three months were “soft” and July and August delivered a big rebound. “The gains of July and August have now made up for the losses of April, May, June in terms of our net year over year,” he added.

The virus and New Delhi’s ban on Chinese apps in recent months haven’t been a complete downer. Both MX Player and Gaana are attempting to fill the void left by the ban on TikTok in India and have received better traction than some of the more heavily-funded firms such as Twitter-backed ShareChat, according to mobile insight firm App Annie, data of which an industry executive shared with TechCrunch.

MX TakaTak, the short-video app from MX Player, has amassed over 10 million daily active users and 45 million monthly active users, it claimed earlier this week. Users have uploaded more than 15 million videos on the app and clocked over a billion views within a month, it said.

BCCL has engaged in conversations with investors in recent months to sell stake in Times Internet, a person familiar with the matter said. The deal, if secured, would make Times Internet — which employs more than 6,000 people, up from 5,000 last year — financially stronger to explore more acquisition opportunities, the person said. Gajwani declined to comment. Bloomberg first reported about the talks.