After strong results from Facebook and Snap this quarter, all eyes were on Twitter to see if the other big, publicly listed social network could deliver a hat trick of growth. If we judged the company on financials alone, Twitter did not disappoint.

However, Twitter’s achilles heel remains user growth. It has now slumped to 321 million monthly active users, falling short even of estimates that were expecting a decline. Shares are equally slumping in pre-market trading, down more than seven percent so far.

The overall picture may have also not been helped by weak guidance. The company said it expects Q1 revenues to be between just $715 million and $775 million, with operating income between $5 million and $35 million. Even with Q1 seasonal declines, this is a big drop from Q4, also a jump up on financials from a year ago. Twitter estimated that capex for 2019 would be between $550 million and $600 million, which makes one wonder if it has some acquisitions in mind, too.

Twitter’s Q4 MAUs are a decrease of 9 million year-over-year and a down 5 million on last quarter with declines both in the US as well as international markets.

Twitter said the decline was partly due to three areas: “product changes that reduced the number of email notifications sent, as well as decisions we have made to prioritize the health of the service and not move to paid SMS carrier relationships in certain markets, and, to a lesser extent, changes we made to comply with the General Data Protection Regulation (GDPR) in Europe.”

The company will stop giving MAU numbers after the next quarter, which is one way of shifting the ongoing decline out of the forefront of the conversation.

Advertising revenues were $791 million, accounting for 87 percent of the company’s revenues (more on these below). “Monetizeable daily active users” are now at 126 million up from 124 million in the previous quarter. 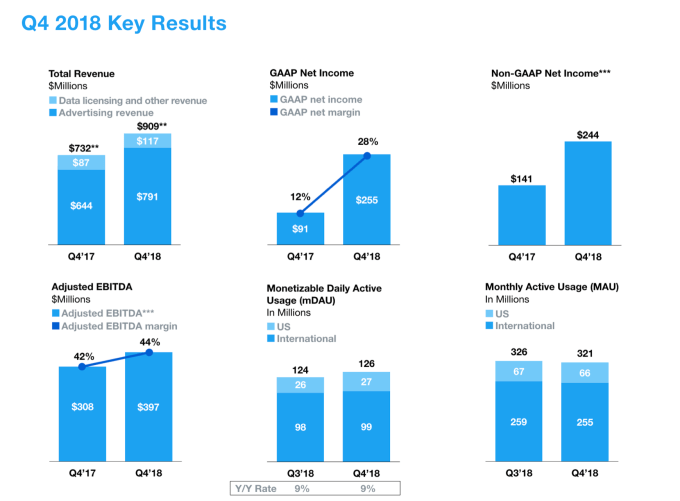 To put user growth into some context, Twitter has long-standing issues with user growth that even predate the company going public. In many quarters — such as last quarter, when it also beat estimates on revenues of $758 million and earnings per share of 21 cents; and a year ago, when it also crushed financials but fell on subscriber growth — user numbers, specifically monthly active users, have remained flat or even shrunk.

(Even analysts factor in declines in their own estimates. They had been expecting 324 million monthly active users in Q4, according to a poll from Bloomberg, down from 326 million in Q3.)

Some of Twitter’s challenges on the user-number front have included the fact that despite its almost addictive popularity with some people, a strong showing from very high profile figures “speaking to the people” on Twitter, and the fact that it’s become a go-to for the media both to source news as well as broadcast — the real-time aspect of the feed lends itself well to all of these — it has been hard for it to find that groove with everyone.

Especially for many later adopting, newer users Twitter has proven to be confusing or too much work to use. That’s led to the company regularly tweaking the service to try to make it more user-friendly, with the latest move being that the company is planning a “beta” app to run multiple experiments simultaneously on a live audience receptive to seeing those and giving feedback.

As with Snap’s Snapchat, Twitter has worked to mitigate those numbers another way, too: by focusing and asking others to focus on daily active over monthly active users. That will become an official policy soon: after Q1 it will stop giving out MAU numbers at all.

So why do user numbers ultimately matter? The general thinking goes that, in a business based around advertising and user data, as Twitter is, the larger audience you have the more revenue you can make off them as a product — a turn that Google and Facebook have made to great effect.

So it’s interesting that despite Twitter’s issues with user growth, the company has been coming up trumps (sorry) with its business model, specifically initiatives around advertising and marketing and figuring out more clever ways of targeting those who are on there.

Its ad revenues were up 23 percent, and Twitter said that new formats around video media are in particular showing strong results. Video accounted for more than half of Twitter’s ad revenues in the quarter and for all of 2018.

For any ad-based business — and any investor or analyst of those ad-based businesses — a focus not on volume but on the quality of the audience is an interesting trend and it will be interesting to continue watching how that develops longer term, even if it’s not a trend that’s particularly benefitting Twitter’s own share price at the moment.

Less strong this quarter were the company’s various enterprise efforts. The company said that data licensing and other revenue totalled $117 million, an increase of 35 percent but still a small proportion of overall revenues.

Facebook’s strong results this quarter came at the same time that the company has been weathering a ton of bad publicity around how its platform has been exploited (seemingly with little resistance from Facebook) to manipulate democratic processes, and how Facebook itself has been exploiting users to extract more data to help it build products.

The fact that one (financials) do not seem to be impacted by the other (bad PR) raises a lot of questions: does the public really not care about all these things, or will the commercial ramifications come down the line as a delayed reaction?

It’s not clear how it will play out, but regardless, Facebook has been taking measures to try to set things aright, both in terms of hiring more people to “fix” some of these issues, and also to reorient its whole staff to prioritise cleaning up the platform both when planning for future products, and in their daily work.

I mention all this because Twitter dedicated some time in its earnings to highlighting how it has been battling abuse. This has been one of the company’s biggest points of criticism from users, both as observers and as first-hand recipients of harassment.

Twitter noted that there has been a 16 percent year-over-year decrease in abuse reports. And it highlighted how it has improved security, updated rules for hateful conduct, and ramped up monitoring “behavior-based signals” to better manage what Tweets are viewed.

As with Facebook, it’s really not clear yet how this effort, or the frustrating and dangerous presence of trolls, will longer-term have an impact on the company’s bottom line, but we at least have one proof point of the negative impact: it has apparently affected how Twitter was viewed once as an acquisition target. More generally, unless you are a ruthless monster, there is an argument to be made to fix it regardless, because that is just the right thing to do. And that is what Twitter is trying to do.

It said that it will also focus on this in 2019, with a “more proactive approach to reducing abuse and its effects on Twitter, with the goal of reducing the burden on victims of abuse and, where possible, taking action before abuse is reported.” Specifically, it said it would focus on abuse that could cause severe or immediate harm; and a better sign-up process to screen for bad actors.”

Twitter noted that revenue for 2018 exceeded $3 billion, up 25 percent (24 percent on a constant currency basis). It noted that TellApart contributed $45 million of revenue in the first three quarters of 2017 but was “fully deprecated” in Q4’17, total revenue grew 27%. It also noted that 2018 was the company’s first year of GAAP profitability, with net income of $1.2 billion, representing a net margin of 40 percent.